Sick of being sick.

For the last week or so I have been sick.  Like annoying, coughing, nose running, feel like shit sick.

I've had plenty of time to think about this whole sick thing while I've been down & out and like usual, I have some shit to say about it.

I'm tired of taking, well, everything.  I won't take a cough drop anymore.  Nope.  Not gonna do it.  I don't care if it helps me stop coughing (it doesn't), it makes my entire mouth feel like I've blown a medical leprechaun. Seriously, it's like a Jager Bomb without the bomb.  Or the orange juice after toothpaste thing.  But it lasts all fucking day.  Just no.  I'll cough.  Add the cold meds to the birth control, happy pills, antibiotics, thyroid meds & whatnot, I can't remember when to take what.  I'm so confused I gave the Mini vaginal fungus cream (remember all the antibiotics I'm taking) to use on her hands.  The good news, she won't have yeasty hands.  Bad news, I missed out on that Mother of the Year award...again.  Pfffffftttt.

Vicks vaporub.  I love the smell of this shit, I don't care if it works or not.  The problem here is, it only lasts about an hour.  If I have to get up every hour and re-apply this stuff, I might as well save the $3.49 cause it makes me feel like someone blew a load on my chest.  Really.  It just feels like that.

Men.  Don't get me wrong here, the SAB was a complete fucking saint while I was sick, HOWEVER, he made sure to get his digs in whenever he could.  If I had to hear "Well, I wanted to go the movies but she was sick" or listen to him whine about how cranky I was one more time...  I was considering just gagging on my own phlegm.  Cause who asked you to hang around & do nothing while I was sick?  Herein lies the real truth, the SAB loved it when I was sick cause it gave him an excuse to take care (do nothing) of me.  And ya' know what?  I appreciated the fuck outta that shit.  Whatever the reason.

Almost no sex.  This is bullshit.  Oh we tried, I wasn't dead.  The SAB actually said he didn't want to risk it because I'll start one of my coughing jags and pee all over the place.  We ain't that kinky.  But, seriously, somebody (get on that) needs to come up with a better way.  Sicky Sex Machine has a nice ring.

The work thing.  I hate calling in sick.  It's like the worst.  It's a waste of a personal day.  A very wise man once told me "Never call in sick when you're really sick".  I believe that shit.  Sadly, I'm all old & sick & stuff.  So, bye-bye personal days...

Kids.  I hate kids.  But it so much worse Mommy is sick.  I'm fortunate that the Mini was with her Dad for the worst few days so I didn't feel bad about ignoring her. What?  I feel badly when I'm forced to ignore her.  It's totally different when I'm ignoring her just because.

The depression & guilt.  I'm sure it isn't just me.  When I'm sick I feel absolutely horrible about ALL THE THINGS.  The cleaning that isn't getting done, the shopping, the Mini, the SAB, my crankiness, all the things.  You get it.  The guilt of not getting all the things done makes me depressed.  So now it's all sicky, depressed, guilt filled, sexless, whiny, cranky, me.

The mouth.  This has been by far the worst.  My mouth tastes like I licked a dead donkey's dick.  I taste nothing except rancid, rotting, nastiness.  My tongue is covered in bacteria.  I have scrubbed it so hard, the skin is peeling.  I soak it in peroxide.  Nothing like spitting up peroxide flavored foam to get your day going.  Yes, the visual here is fabulous.

Lastly, I'm just tired.  For the first 4 days of this glorious sick-o-rama, I was out and about, cooking, cleaning, taking care of the children.  Being me doesn't stop for a cold.  When I finally relinquished the Mini to her Dad, I laid sloth-like for 2 days.  Guess what?  I'm better.  Not 100%, but better.  Who knew rest actually worked?  I may have to try that shit again.


Posted by Precious Princess of Banananland at 11:53 AM 6 comments:

Posted by Precious Princess of Banananland at 9:58 AM 7 comments:

Each year for the past 15 years or so I have sent out a Christmas letter. Yes, a written letter inside a real Christmas card that you mail via USPS with a stamp. You remember, right?

Nobody reads that shit. I know because family members, friends, etc…will ask me shit. Shit that was in the letter. This year, I’ve decided I’m going to write my letter and post it here. On my blog. Cause you guys will read it. Well, some of you. Some is better than ‘the none’ who usually read it. So there.

2013 – Bananaland , a year in review… Our year began like it usually does. With too little money, no resolutions (disappointment & failure are for the birds, folks) and the kids. I hate kids.

The SAB and I began the year with a 3 day trip to Savannah, GA. It was our Christmas gift to each other. It was awesomewonderful and awesome & wonderful. We did none of the “touristy” bullshit. High priced stores, bars & restaurants on the river? We walked by ‘em. We’re poor. We hung in town. With the locals. At the bars & shit. Cause we rock. If you haven’t been there, you should go. Really. I know stuff.

I’ll be honest, I don’t think any other shit happened until around March when we spend the weekend in Mt. Dora, FL for the SAB’s birthday. There, we met Amy the fuck girl. Yep, that’s her name. Well, it’s the name we gave her. Cause, well, we couldn’t stop saying fuck. And she was there. So…Amy the fuck girl she became. She’s on the page. Pay attention. You’ll see her. She’s the reason that crazy fucking Bus Driver To Hell found me. Yep, small world.

Hold the phone! I totally forgot. In February, I met two of the most bestest friends I have ever known.  Pink Fuzzy Slippers and My Hubby's Pants and It's Why You Like Me. (The Admins behind the page not the actual page cause that would be weird.) We talk every day. Seriously. Even though they are like really far away, they are great support and they’re both total bitches so we all rock together. XX, ladies.

Also in February, I quit my 2nd job. It was much needed relief. Even though we desperately needed the money, the time spent away from home was really affecting the Mini. Also, I was worn out, exhausted, abused and just plain tired. After 3.5 years of working two jobs, finally, I could live again. Yay.

In the spring, the SAB and I began the long drawn out process of taking care of our (really bad) finances so that we can begin anew. The SAB finished up his bankruptcy over the summer and mine should be complete around April, 2014. I will lose my house then so if any of you guys need some roommates - *waving* Totally kidding. About the roommate thing. (For now) We will be moving in with the Drunken Queen (my mommy). Yes, all of us. Living together. I’ll have lots to write about, snort!

We managed to save some pennies so that over the Summer we could take the little kids on a good old fashioned family vacation. Yeah, that sucked. We (Me, the SAB & the Drunken Queen) had a really fabulous time.  Click here to read about vacation. The children, however, we’re not impressed. They whined, moaned, bitched, complained and acted like, well, kids. My feelings (Yes, I have them) were totally hurt. I know a week ONTHEBEACH at a beautiful resort with 2 pools, games, food, and did I mention ONTHEBEACH, is really shitty. These kids really did me in. I’m still not over it. We will NOT be taking them on another vacation for a good, long time. I hate kids.

In October the SAB’s parents moved from South Carolina back home to Florida. This pleases me even though I’m not a fan of parents in general. What? One of my original dating rules was to only date men whose parents were dead or lived out of the country. Don’t ask why. You KNOW. However, it pleases me cause’ we don’t have to go to the dreaded South Carolina to visit them anymore. Win!

This year instead of gifts we opted for a weekend trip (not a vacation) away with the little girls to visit museums and check out some cultural shit in Orlando. Much cheaper and just think of all the special memories we’ll create, AKA: I’ll have some good shit to write about next year. Oh and if you see them, don’t mention it. It’s a surprise. K? K.

The Mini is hangin’ in. Her grades are falling in a couple of classes this year. It may be the new Common Core Standards that have begun in the schools and it may be……puberty (She’s a total ass). And it may be her teacher who I think is an idiot. (She is) Whatever it is, it has been a rough fuckin’ year with this kid. Fer real. We have begun the whipping into shape.

Red continues to do well in school. Also, she has figured out how to complete a complete & utter smartass. It’s awesome. She’s really takin’ this mouthy kid thing all the way. Wait, we already had one of those (see above). *sigh* Thistooshallpass.

The SAB and I are doing well. Like very well. No, we’re still not married. Stop asking.

Looking forward to seeing some of you over the holiday…

Enjoy your holiday season and as you enter into the New Year, remember…DON’T BE A CUNT. 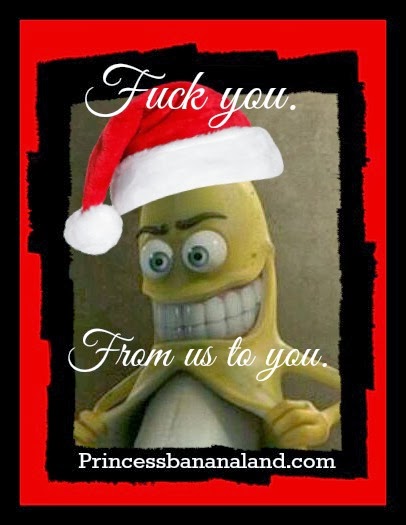 Posted by Precious Princess of Banananland at 9:02 PM 2 comments: