Do NOT ‘friend’ your boss on Facebook.  Ever.  Honestly.  You might think this is a good idea at the time. It isn’t.  I promise.  I know stuff.  4 years from now when your boss is a meth head and you’re now under investigation because he or she made some inappropriate (and funny) comments on your Facebook page? You won’t like it.  Or, in six months when you decide you hate that job and that boss and the feeling is mutual and then he or she decides to comb through your page to get something on you?  You won’t like it.   Your boss probably won’t fully appreciate the picture you posted of you grabbing your friend’s boob with one hand while holding two beers & a joint in the other.  They may snicker a bit and pretend to enjoy it, but they are just thinking of all the ways to blackmail you with that shit later. You won’t like it.  Most importantly, when you call in sick to go the beach you’ll have to constantly remember not to post pics of the beautiful day and the kickass time you’re having and that would just suck. (remembering stuff is hard)  And?  You won’t like it.

Talking all down & dirty about your relationship is a NO. I’m still not sure how or why the fuck people don’t ‘get’ this.  It’s just common sense.  If you wouldn’t say it out loud?  Don’t put that shit on Facebook.  Not the regular bitching about your husband/boyfriend/girlfriend/wife stuff.  I mean your deep down dirty secrets. The people on your page do NOT need to hear, under any circumstances, how your boyfriend broke up with you because you only like anal or that you like for your dog to watch while you perform oral.  Or for example, announcing that you ‘suspect’ your other half is cheating on you.  This is not good.  If they are (cheating), you’ve warned them. (never ruin the surprise)  If nothing’s going on, you’ve opened the door for one of your other Facebook friends to begin the backstabbing and commence to stealing your man/woman.  Don’t gasp, it happens.  You know it does.  The more you open your relationship stuff up to others, the more chances you have to fuck up your relationship.  And anyway, you just look and sound like an asshole and we all just laugh at you.   So don’t. 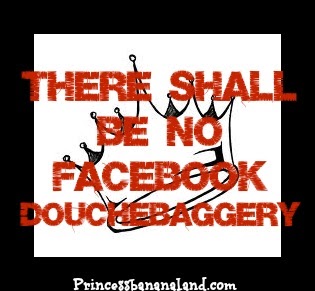 ‘Friending’ your ex, your ex’s ex, your mom’s ex, or anybody’s damn ex - All bad.  I’m telling you.  Just like the boss thing?  You will regret it.  It seems all cutesy and awesome to be friendly and sweet and let every lil ole person you meet enter your world.  It isn’t.  It will bite you right in your sweet ass.  It may be later than sooner, but trust me.  It. Will. Happen.  At some point (probably 3am on a Friday), one of these exes or even YOU will be all drink-y and cry-y and they or you will inevitably say something completely fucked up that will turn the world upside down and force it to burst into flames.  Then?  The shit will come squeezing through the fan.  These people are exes for a reason.  Somehow, somewhere, you or someone you know wanted to rid their lives of these people.  Leave it that way.  Look forward, kids.  It really is the only way to go.  The world is an ever changing place.  Keep up.

Do NOT let your children on your Facebook page.  Of course you should be on their page; however, there is no need for your 13 old to see ANYTHING you do on Facebook.  This is real shit, folks.  No matter what you think you aren’t letting them see?  They see.  Every post, picture, status update you like or even think about liking?  Facebook is letting your kid see that shit.  So even you aren’t posting anything off-the-wall personally, your kid does not need to find out that you’re in a private group for men who like women who dress like men or whatever else is getting your freak on, on Facebook.  That’s really a sit down discussion type thing.  In my humble (and awesome) opinion, the kiddos do NOT belong on Facebook. Period.  Its way too, well, Facebook.  Hell, I have to scroll really fast sometimes not freak the fuck out on some of the stuff I see with my 43 year old eyes.  That is the stuff your 9 year old is investigating. Thoroughly.  Keep in mind, your kids will also see all of your friend’s crazy shit too. You know you have that one friend who can’t stop giving every gory yet oddly enticing detail of her sex life. Or that other friend who you haven't seen in over 15 years, just got arrested for growing medical marijuana and constantly posts ’fuck the police’. Or that friend of a friend (who you don’t really know) who just happens to a sex offender with a yen for the kids.  All of this stuff happens in the real world.  Your kids shouldn’t have to read & or experience it on Facebook. Yes I know I'm an old stick-in-the-mud jackwagon, but whatever.  Oh and your kids always make stupid comments on your posts and act really dumb and stuff and that pisses me off.  I hate kids.  I damn sure don't want them on my Facebook page.

I hope you’ll take the time to let these few rules marinate and then set (sorry for the foodie talk, I'm hungry). You need these rules.  I promise.  I know stuff.  For those of you who already follow these rules?  You rock the mostest.  The rest of you?  Get on that shit.  What the hell are you waiting for?

Posted by Precious Princess of Banananland at 9:48 PM

I would laugh harder if all that shit wasn't true...every. last. word. :)

Excellent advice jackwagon. Sad to think there are still idiots out there who 'friend' their bosses. Bosses are not friends. Not in the real world either. We spend all this time & energy in teaching sensible cyber-safety to kids - I think most of the adults need to learn a few things.

If only this was written sooner! LOL I may have done a couple of stupid things listed above LOL

You're so smart. That's why I love you.

Exactly. Run in the road ya lil brats. ;)

Dude!!! Exactly. I'll never understand why people do any of this. At least you didn't say "Don't make friends on Facebook. They may be stalkers" Cause then? I'd punch you.

Really? I would never. I know these two awesome whores & remember, I met the SAB on FB, too.

I nominated you for an award:
http://www.comfytownchronicles.com/2013/09/comfytown-is-oh-so-fabulous.html
Mostly bc I knew if you didn't want to do it, you would just ignore me. I'M COOL WITH THAT, YO.